Happy Sunday folks! I’m writing this from my garden – I’m actually sitting outside, instead of being cooped up indoors and wondering whether it’s going to be a light drizzle or torrential downpour outside. This makes me very happy indeed! (And of course, I’m keeping a close eye on that big grey cloud that’s coming ever closer over the horizon.)

Anyway, we’ve reached Q in my A-Z of being a vintage girl in a modern world, so this week I’ll be talking about Queen Elizabeth II and her incredible sense of style. Yes, I know my choices were pretty limited with the letter Q, unless I wanted to talk about queueing or quills, but I’ve wanted to talk about HRH for a while now.

Some of you may have read my post earlier this week talking about 1950s summer holidays, which includes some lovely pictures of my gran, who I adored. She was a big fan of the monarchy in general, especially the queen, which helped to form my admiration of her.

Gran loved any stories to do with the monarchy; one of my cousins – when she was very little – once gave flowers to the queen mother at Sandringham, and when the queen mother said ‘Thank you’, my cousin replied ‘You’re welcome!’. This story was told so many times it’s entered family folklore, but I could never understand why it was funny – to me, it seemed like she was being very polite! Gran also had a friend called Elizabeth, and after my sister and I met her, we were convinced Gran was friends with the queen (in our defence, we were around seven and five at the time, and she did sound like her).

So, my love of the queen is longstanding. Then recently, I was watching a programme marking the queen’s 90th birthday, and it got me thinking about a few different things (the role of the monarchy and how she’s managed to turn public opinion around pretty spectacularly since the 1990s are among the things I won’t go into here), but I was definitely struck by her outfits, and I’ve pulled together a selection of my favourites below (all hyperlinked to their original source): 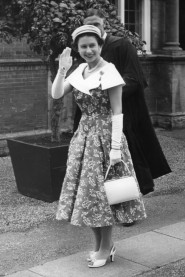 Quite by coincidence, earlier this week I received an email telling me about an exhibition commemorating the queen’s birthday that’s running between now and October at Buckingham Palace, Windsor Castle and Palace of Holyrood House. Called ‘Fashioning a Reign: 90 Years of Style from the Queen’s Wardrobe’, it features 150 outfits from HRH’s extensive wardrobe across the three locations, and the website’s use of the phrase ‘unprecedented collection’ excites me greatly.

Much as I’d love to visit Holyrood House, it’s looking quite unlikely between now and the end of the exhibition, but I’m fully intending to go to Buckingham Palace and Windsor Castle, so I can soak up as much of the queen’s sublime style as I can. Her coordinating skills at 90 put mine to shame at 31 – I mean, I’ve only just discovered hats.

2 thoughts on “Q is for the Queen: the A-Z of a Vintage Girl in a Modern World”