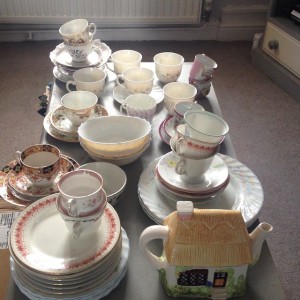 Last Friday, The Boy and I visited our wedding venue, Heatherden Hall, for the second time. As regular readers of this blog will know, that’s around the time it all started going horribly wrong with IWM Duxford, our first venue. Luckily, our meeting went very well – the venue is more beautiful than we remembered and our wedding coordinator is a marvel, holding our hands where necessary, gently suggesting alternatives to our more outlandish ideas, and so efficient that she makes my four page long to-do lists look inadequate.

We’d been holding off on doing much else “just in case”, and the successful meeting inspired us to get cracking on the rest of the planning (good job really, as we only have four and a half months to go), so while The Boy went suit shopping last weekend, I dragged my lovely mum, a lovely chum, and a lovely chumette (she’s five, and therefore too small to qualify as a full chum just yet) around the charity shops in St.Neots to look for vintage-inspired, afternoon tea crockery.

“Why don’t you just hire it in?!” I hear you, more sensible people, cry. There are two reasons for this. The first is that The Boy is having palpitations about how much the wedding is costing, and if we buy the china, we can sell it on afterwards, hopefully for what we’ve paid for it, which will save us a bit of cash.

The second is that I recently signed up for Spare Chair Sunday, a lovely initiative started by charity Contact the Elderly, in association with Bisto. Basically, if you have a spare seat for Sunday dinner, you offer it to an elderly person who would otherwise be alone. Unfortunately, our house isn’t very accessible (dark passageway, no parking), and doesn’t have downstairs facilities, to use Paddington Bear’s phrase, so we’re not able to take part. Undeterred, I saw that you can also host an afternoon tea for a larger group, so after the wedding, I’m planning to host one in a local hall. Friends and family, fair warning – if you see a text or call from me shortly after the wedding, it will probably be to encourage you to bake something.

Anyway, back to foraging for crockery. After tea and scones at Betty Bumbles, and an impromptu reenactment of Snow White being given the poisoned apple (the chumette directed and starred, I played the old hag), we set off to buy up the town’s entire stock of cups, saucers and cake plates. The chumette turned out to be rather helpful – not only did she pay for some of the things (I gave her the money and she went to the counter, I’m not extorting money from primary schoolers), she also helpfully carried my handbag around most of the shops (I’m not saying you should, but if you want to encourage this sort of behaviour, a vintage handbag might be the way to go). She also helped choose a duck-shaped teapot, which I am very excited about.

My lovely mum and chum were just as helpful, finding things that I’d missed, either because something else had caught my attention (most notably, a fridge-shaped teapot), or because they were too high for me to have noticed. After a couple of hours, we’d rehomed 6 teapots, 28 tea cups, 44 saucers, 37 plates, 3 milk jugs, 8 sugar bowls and 7 cake plates, and were feeling very pleased with ourselves.

Flushed with this success, I turned to The Boy earlier this week and said, “I think we should look in Bedford, and perhaps Cambridge, for more stuff!”. He foolishly agreed, and we christened the search Operation TeaCake, which I’ve now decided to adopt for the rest of the wedding.

So yesterday, after a visit from my mother-in-law-to-be, who offered to dig out some cups and saucers for us (she later returned with 15 sets. She is brilliant, and this is just one of the reasons why), we had a short discussion about whether we should visit Cambridge or Bedford. The Boy won (partly because he reminded me Cambridge has a whole street full of charity shops, and partly because he was driving), so we headed into Cambridge. Where we discovered something was going on (later confirmed as a football match by one of our friends who’s in the know about these things), and finding a parking space was very difficult indeed. Eventually, after about an hour we found one, and had a successful visit to Oxfam (lovely green floral dinner set – if anyone needs a serving dish, we’ve got one going spare). We didn’t find much at all in the other shops, but that was ok, because we had an even more successful visit to Byron. If you’ve never been (and you’re in the UK), go. Go now. Stop what you’re doing, get in the car, and order the Run Rarebit Run burger.

And, because once I get an idea in my head, I become a bit obsessed, this morning we headed to a regular car boot sale in Huntingdon, just down the road from us. After a slightly stressful visit to the cashpoint, which was only offering £20 notes (not what you want at a car boot, where change reigns supreme, I’m reliably informed. On a related note, international friends, are car boots a thing in your area of the world?).

The photo at the top of this post is our haul from this morning; as you can see, we’re getting there (we now have 77 teacups, excluding the Prince Charles and Princess Diana commemorative set Chris’ mum found…I’m not saying it would be a bad omen, but better safe than sorry), although I was very sad to have to leave a Brambly Hedge set behind – I just couldn’t justify spending £40 on something that could easily get broken in a high jinx-related incident.

***Off on a tangeant: I’ve just realised that in the photo, you can see a sneak peek of one of the wedding centrepieces. Enjoy it, for I won’t be sharing any more about those until after the wedding – there have to be some surprises, after all.***

In thrilling news, The Boy has just turned to me and said, “I never thought wedding shopping would involve going to a slightly grotty car boot sale on a chilly October morning. Still, it was more successful than suit shopping last week.” He didn’t hate it, hurrah!

So, in my usual “straight in at the deep end” fashion, I’m off to fill out our applications for Bargain Hunt.