I know, I know – I usually only post on a Sunday, and here I am posting on a Friday, throwing out everyone’s week. Sorry, sorry. I promise it’s worth it. Because I’ll be talking dresses, unicorns and Victory Sisters (oh, my!).

As those of you who read this blog will know, I have a Pearl coat from Collectif. I am somewhat obsessed with it, as is pretty much everyone I meet while wearing it. It’s reaching the stage where I’m going to print out lots of cards with the link to buy the coat, just so I no longer have to say, “It’s from Collectif. No, Collect-eef. It’s a vintage reproduction brand. Yes, it’s called Pearl. Look – just let me write it all down for you.”

I kid, of course – I love talking about it.

But there was a time, two years ago, where I’d never heard of Collectif. Then, a friend of mine, a seller of beautiful shoes (she’s a dangerous friend to have), mentioned something about them on Facebook. At a time when they happened to be having one of their famous “50% off almost everything!” sales. It was love at first click.

Then, last year, Collectif held their first ever 100 Dresses event. For £10, you got a Collectif dress (it was just after I started going to Slimming World, so the red Dolores dress I got is now two sizes too big, but I can’t bring myself to sell it) and entry to a party they were hosting after London Edge (amazing trade show that I must go to next year). I took myself off to London for the day and went to the Imperial War Museum, before heading to the event. I had a whale of a time, and even saw Georgina of Fuller Figure, Fuller Bust, one of my heroes.

No, of course I didn’t say hello.

(Related note: this year I saw Miss Deadly Red, alternative model, regular star of Collectif’s ad campaigns, and one of the most beautiful women I’ve ever seen. No, of course I didn’t say hello.)

When I found out they were bringing the event back this year, but even bigger and better than before, I waited a full two seconds before I got in touch with my good friend, who I’ll call Coco. She fully embraces me and all my quirkiness, even when people stare. She’s also a massive fan of the brand, so approximately four seconds after I’d decided to go, we had a plan – at 5pm on the day the tickets went live, I was ready to pounce (they sell out fast), and managed to grab two. Those tickets meant we each got a dress, hair styling, Champagne, and the chance to gawp at all the fashionably dressed ladies and gents.

We arrived, and were greeted by lots of very smiley people (always a good start), despite the fact we got a bit lost on the cobbled streets of Camden Market and were a few minutes late. After grabbing our dresses from the rack, we headed to the changing rooms – unfortunately, Coco didn’t like her dress, but the lovely Collectif ladies were very accommodating and let her swap (see – lovely). I think you’ll agree, she looks pretty fab:

As do these lovely ladies (any excuse to feature a victory roll):

In case you’re wondering, I wore the Nadine tea dress, and my hair was in its first ever beehive. I know, I didn’t know my hair could do that either. I wore a corset underneath (the dress, not the hair), by What Katie Did – I don’t want to overstate it, but that corset has pretty much changed my life (and yes, I can breathe in it. And no, as far as I can tell, it’s not damaging my internal organs in any way).

One of the things I loved most about the event is – with a selection of around eight dresses to choose from – you get to see the same dress on lots of different body types. It always looks lovely. And yes, I did make lots of Dad jokes, by going up to people wearing the same dress as me and saying, “Oh, I love your dress!”. Most took it well. While we were in the shop, Coco and I had a chance to catch up with the fabulous Street Style Carousel, who was lovely, even after I went a bit weird and fangirly when she introduced herself (she has a monthly article in Vintage Life you see, which I read religiously to get fashion inspiration).

And that’s not all! I recently joined a group on Facebook that’s for people who love the 1940s and 1950s. A couple of them were at the event, so it was lovely to see them too. But I’m rambling. Oh my word, I haven’t even gotten to the entertainment yet. So, once we’d all been primped, and preened in front of the many, many mirrors, we headed over en masse to Solomon’s Yard, an open air venue just across the way (we’d been warned not to wear heels, as we’d have to navigate many, many cobbles. I foolishly ignored that warning!), where we were greeted by this nice chap and his friends, who happily posed for pictures: 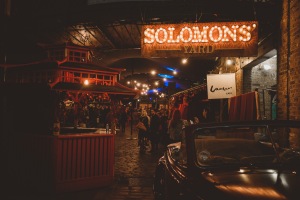 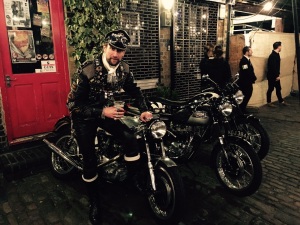 And, of course, the UNICORNS. They had glitter, were prancing around (because that’s what unicorns do), and generally making sure everyone had a great time. I loved them.

We had some music from Diana Thompson to start the party, and first up on stage were The Victory Sisters, who I’ve stalked for some time on social media (they’re lovely girls, with lovelier outfits). It was great to see them live, and really was a bit like being transported to the 1940s, what with the swing dancers and the girls singing vintage tunes – if you ever get a chance, you should definitely check them out (photo by Jackson & Co Photography).

Then was the turn of the Folly Mixtures, a troupe of cheeky, charming burlesque dancers, who I would very much like to be when I grow up. Unfortunately, I was over to one side and didn’t get any good photos, but their 50s diner routine was really fun (probably not one to take your gran to though).

All too soon, devastatingly, it was time to leave to catch my train, so I missed The Tootsie Rollers (who I adore), Meth and Gem Precious (photos by Jackson & Co Photography). 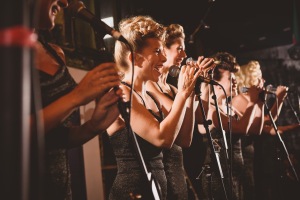 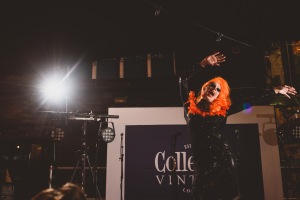 But, I did get to spend some time with The Boy. Who told me I looked beautiful, he liked my beehive, and that my breasts were “Weirdly high up”. So I had to explain, in a carriage where I could almost hear strangers thinking, “Well, why are they so high?!”, the many additional benefits to wearing a corset.

But he’s a nice sort really. When we got home, I made him take many, many photos of the back of my head, on the understanding that “Never again will my beehive look so good”.

I hope this has been an entertaining sojourn into the world of vintage fashion. On a related note, while some people have asked what I’ll do with this blog once The Boy and I are married, others have assumed, “Well, it’s probably going to be about vintage and retro fashion, and I’d imagine it will have more than a nod to the 40s and 50s”. They’re quite right. So, consider this a sneak peek of what you can expect come 14 February, 2016, when the words “Golly”, “Ritzy” and “Spiffy” could well be thrown around with gay abandon.

And, finally, back to Pearl (isn’t it always?), a very nice chap I work with, who as far as I was aware had little-to-no interest in women’s fashion, emailed me today to tell me, “That coat you wore the other day was ace!”. See, it’s a universal way of making friends.