So, it happened. I turned 30 and I feel…fine, actually. Well, apart from my body now being approximately two-thirds cake.

Lots of lovely things happened this week – The Boy came home (with the PinUp Girl Jenny skirt I’ve had my eye on), I made my sister a fruit cake for her birthday and it didn’t fall over, went to Oxford for afternoon tea with my mum and sister, took part in the Nostalgia! exibition (more on that once it opens in Bedford next week), and had a fabulous work birthday (banners, inflatable princess crowns and cake included).

To top it all off, last night was my wonderful 30th birthday party that The Boy and I unofficially dubbed “Wedding Run Through Part One”. I know, it’s catchy.

My sister even made the cake, which was immense. She was pretty proud of herself (as well she should be – look at it, it’s awesome) until she realised the wedding cake is going to have to be even more spectacular than this:

The party was held at the fabulous Bertie’s Bar in St.Neots (Betty Bumbles tea room by day, cocktail bar by night), and the theme was (optional) 1930s-1950s dress. I think you’ll agree, my friends scrub up rather well…(my dress is from 20th Century Foxy) 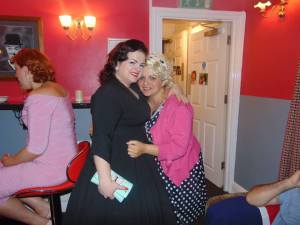 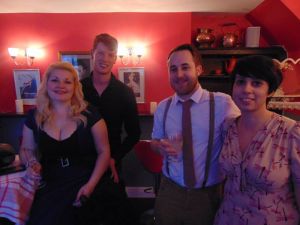 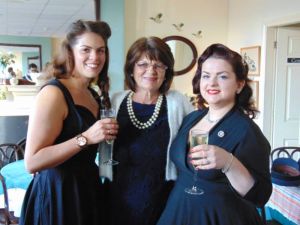 As I’ve mentioned before, The Boy doesn’t want a photo booth at the wedding (and, to be fair, he has a point – we’re going to be pretty much at venue capacity, so if we did have one, we would probably have to squeeze it into the ladies’ loos, and the queue is likely to be long enough as it is), so as you can see, I snuck in some DIY props to the party instead. Which was great fun, once two of my lovely chums had separated them all out, as they’d all stuck together in one, giant photo-booth-prop-ball. One of them (oldest friend, bridesmaid) blamed the humidity for the glue spreading. I didn’t correct her, even though I know for a fact it’s because I put the glue all over the wooden sticks and shoved them all in a bag together. So…um…I know they’ll be reading this, and it’s awkward. Sorry ladies. 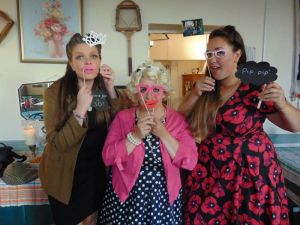 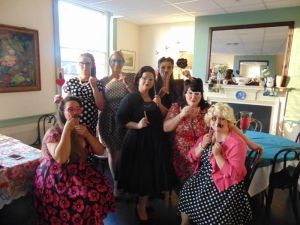 As you can see in the photos, the venue is amazing; all decked out like a 1940s tea room (and my gran and grandad’s good front room. You know, that second living room that you were only ever allowed in at Christmas, and, at a push, someone’s birthday?). It fitted perfectly with my theme, and meant the minimum amount of room dressing was required. By which I mean none (apart from the prop unsticking, of course). This left me plenty of time to wander around, worry that no-one was going to turn up, and make awkward requests about removing tables. The staff were all very nice about it though. If you’re in the area, I’d definitely recommend having tea and a scone during the day, or a cocktail in the evening (take the barman’s advice though – if he tells you a dirty martini is going to be pretty strong, and fairly salty, he’s not lying. I liked it. My sister did not). It’s a family-run place, everyone is super-friendly, and they have lots of stories about the china they use (and customers who turned out to be petty thieves with a penchant for vintage taps).

Regarding room dressing, I should probably warn The Boy that this is the exact opposite of what will be required for our wedding, and he can expect at least one or two hissy fits about the following things (plus at least three flower-themed meltdowns):

c) The chairs in the ceremony room don’t look vintage

d) One of the teapot centrepieces getting broken (I fell up the stairs while telling him how much I missed him on Thursday, he’s currently walking around with a stick because he’s done something to his back. I think it’s safe to assume at least one teapot is getting broken due to clumsiness).

The main reason we’re calling my 30th “Wedding Run Through Part One” is because I didn’t get to spend nearly enough time with the wonderful people who came to celebrate my birthday. One dragged herself away from her new puppy, one travelled all the way from Lincolnshire, one from Kent and three from London/Surrey, several dragged themselves away from adorable children and/or Saturday night TV, and I wanted to spend the evening with all of them, but instead had to spend relatively short amounts of time with each of them, because there were so many people. I’m told that this is definitely going to happen at the wedding, except with the wedding being four times larger, I can expect the time spent with each person to be correspondingly smaller. I also said to The Boy that I was sad we didn’t get to spend more time together. He warned me that this is also likely to happen, unless I agree to an elopement. Which is not happening – apart from anything else, I have at least three aunties who would kill me.

So, to everyone who’s coming to our wedding, please let me apologise in advance for not being able to spend the whole day with you. Take it from me, I would like nothing more, and if I could stop time to do it, I would. Now where’s that time turner…

Also, I received some absolutely stunning cards for my birthday, and I love them all. Here are a few highlights:

In other news, we still have two-thirds of a giant birthday cake to eat. If you’re passing by this week, do pop in for a slice or six.